Fencing is the historic art of offense and defense with the sword, in which the object is for one fencer to hit another without being hit first. The deadly martial art of swordsmanship developed into the sport of fencing, in which the objective became the touch and not the kill. Today much of the excitement and challenge of serious dueling remain as the fencer attempts to protect himself from his opponent’s blade while at the same time trying to find an opening in his opponent’s defense.

Modern fencing is a safe sport due to the protective clothing and flexible, blunted blade, which are always used while sparring or competing. The objective of fencing is no longer to inflict a serious or fatal injury, but to demonstrate an ability to outmaneuver and out think an opponent to get the touch. Fencing is now much faster and requires more refinement of technique than was possible with the heavier, longer, stiffer weapons used by the earlier duelist. The rules and manner of fencing reflect its original purpose, even though techniques and tactics have undergone many changes through the years.

There are three weapons used in modern fencing: foil, sabre, and épée.

The foil was originally designed in the mid 18th century as a training weapon. Foil is classically the first weapon taught. This does not mean that the foil is a beginner’s weapon to be discarded once a person becomes proficient in its use. The foil is considered by many fencers to be the most difficult weapon to master and offers a lifetime of challenge to its proponents.

In foil, only touches that arrive on the valid target are counted. The target for foil is confined to the torso. A touch may only be made with the point of the weapon. A touch that is made on a part of the body other than the target (whether directly or as a result of a parry) does not score a point, but stops the phrase and prevents further touches from being scored. 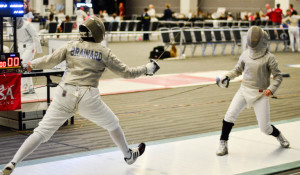 The sabre is a direct descendant of the cavalry sword, a single-edged slashing weapon, originally designed for use on horseback. The modern fencing sabre is more closely modeled after the late 19th century military officer’s dress sword. The valid target in sabre fencing is the entire body above the waist including head and arms. Touches may be scored with either the point or edge of the weapon. Modern sabre fencing requires precise foot and blade work, excellent speed, and focused aggression. 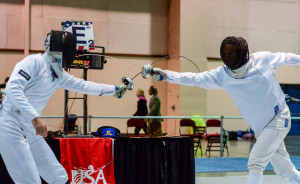 The épée is a direct descendant of the dueling rapier. There is an old fencing saying that foil is art, sabre is fun, épée is truth. Both foil and sabre follow the convention of priority, or right of way, which states that only one fencer may score in any individual phrase d’armes. Double touches are either thrown out, or priority is determined according to the rules, and a single touch is awarded. In épée, the touches are scored as if the weapons were sharp. The entire body is good target, and if both fencers hit, both fencers score. If the fencers are tied at game point, the bout must continue until one fencer has scored a single touch.

In all three weapons, mastery of technique is a prerequisite to playing the game. Both offensive and defensive moves must be practiced and mastered before one is able to play the game at the tactical level. Once the basic movements are mastered, the game becomes more and more tactical as the fencer’s skill level advances. At the highest levels, fencing is often referred to as physical chess. Both opponents have mastered the technical aspects of the game, and those skills are employed to lead one’s opponent into making a tactical error that one can score on. This would be much easier if the other guy weren’t trying to do the same thing to you! At the highest level, both fencers are setting traps within traps.