There are five official age groups for kids and juniors: Youth-10, Youth-12, Youth-14, Cadet (or Under-16) and Junior (or Under-19). Some local tournaments also include a Youth-8 age group. Although this age group does not officially exist at the regional or national level, it fits in with the pattern of the other Youth age groups.

Any competition which does not have any specific age restriction is considered a Senior tournament. This includes competitions marked Open, Division II, Division III, E & Under, etc.

There are two main principles when determining which categories a fencer is eligible for: 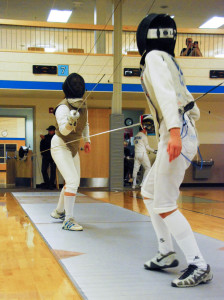 Where the Cadet/Junior season overlaps with the regular competitive season, the Cadet age group is two years older than Youth-14, both the minimum and maximum birth years. The minimum age for Junior is the same as Cadet, the maximum age is three years older. This follows the eligibility rules for the World Championships.

Between JO’s and Summer Nationals, when Cadet and Junior have become a year younger, they are called Under-16 and Under-19.

Any competition that does not have a specific age restriction (Open, Division II, Division III, E & Under, etc.) is considered a Senior tournament. The USFA’s current policies state that a fencer may only fence in such an event if they turn 13 before the January 1st in the middle of the current season. In other words, the youngest birth year eligible for Senior competitions is the year the season started, minus 13. So, for the entire 2014-2015 competitive season, fencers born in 2001 (2014 minus 13) or earlier can fence Senior tournaments. 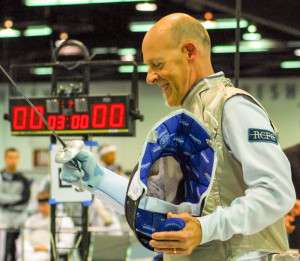 Youth-12 is the boundary

If a fencer is too young for a category based on the birth year ranges, they can fence if they have national points in the next younger category. National points can be earned at Super Youth Circuits (SYCs), North American Cups (NACs), Junior Olympic Championships, and Summer Nationals. 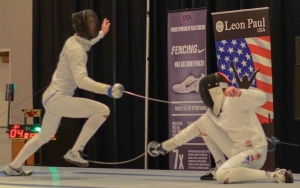 Youth fencers in general can fence their own age group plus the next higher one. Once they are too old for Youth-12, they’re old enough for everything else. Fencers young enough for Youth-12 cannot fence any tournament which does not have a specific age restriction unless they have Junior national points.